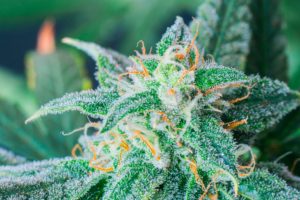 Mold is shockingly common, outside as well as indoors — and mold can easily find a way in any place that offers a source of food and is sufficiently humid. The agricultural sector is no exception, as numerous different mold species are vulnerable to ruin as a result of mold growth, during every single stage of cultivation and storage.

Marijuana is in no way unique, and “bud rot” is infamous among growers and consumers alike. The fact that many cannabis growers are committed to a pesticide-free cultivation process to increase the quality and safety of their end product only makes mold more likely.

Experienced consumers will know exactly what to look out for:

Growers will, on the other hand, want to be more systematic about testing the cannabis they cultivate for mold — the current harvest and the profits they worked so hard for are not the only things at risk. Because marijuana mold is not always apparent from the outside, as it can begin to take hold deep within the bud, growers also risk supplying moldy cannabis and ruining their reputation.

As more and more consumers have legal access to cannabis, the marijuana growing industry has also been regulated to a greater extent. That means that growers supply legal markets are now often obliged to conduct lab testing to ensure that their cannabis is free from microbial threats that include yeast and mold.

How Is Marijuana Mold Testing Conducted?

Different methods are available to conduct marijuana mold testing, each with their own benefits.

The first way to test for mold in marijuana involves molecular testing, with the aim of identifying the presence of specific species of mold. At this point, scientists have a good grasp on the mold species that are most likely to infest marijuana, with species differing depending on whether the cannabis is cultivated outdoors or indoors. Some of these species include Chaetomium, Trametes, Trichoderma, Penicillium, and Fusarium fungi.

With the help of the very same method we have all become unpleasantly familiar with since 2020, Polymerase Chain Reaction (PCR) testing, it is possible to test for the presence of any of the mold species that can infest marijuana.

The other method is less specific. TYMC (total yeast and mold count) testing relies on lab cultures, which enable a lab technician to calculate the overall presence of the total number of microbial cells after allowing the culture to proliferate in optimal conditions. This does not identify specific species.

Marijuana mold testing is not required in all jurisdictions where growing, selling, and consuming cannabis is legal. In the United States, most states where cannabis cultivation is taking place require the potency (THC count and other cannabinoids) to be tested for, alongside the presence of pesticides and residual solvents.

Mold testing is required only in certain states, on the other hand — California has the most stringent marijuana mold testing requirements, while Oregon, Colorado, Nevada, Maine, Illinois, and Massachusetts also require a degree of mold testing.

Growers who are not legally obliged to carry out PCR and TYMC testing can still do so anyway, and thereby give their final product a seal of quality and safety that goes above and beyond.

Consumers should, on the other hand, remember that mold can take hold at any point — including within the dispensary and in their homes. Protecting their personal stashes in airtight containers plays an important role in combating mold growth.

Zona Restoration is able to test for mold on Cannabis for commercial growing operations, don’t hesitate to give us a call!